Lerato Kganyago is adamant on keeping her love life as private as possible, especially now that she is a married woman. Her marriage to businessman Thami Ndlala has already been rocked by the scandals and dragged on social media for the world to see, which is why she has made that entire part of her life totally off limits to the public.

Clearly the couple is still going strong as they have just celebrated their anniversary in a lavish intimate dinner, at one of Johannesburg’s top restaurants. LKG gave her followers a glimpse of the night on her Instagram story, where her and her husband enjoyed some quality time with a steak and wine dinner and the radio DJ even showed off her wedding bling but kept her husband hidden obviously.

Lerato is one of the luckiest women in the world as she recently shared her surprise birthday organised by her hubby Thami Ndlala who makes it a point to go out of his way for his wife to have the best of everything, and their anniversary was no exception.

Watch the video below. 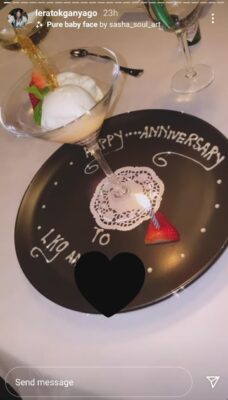