Ayanda Thabethe has become a household name, not only for her amazing fashion and beauty influence but also for her darling personality and hard work in every program that we’ve seen her in, and now the hard work is finally paying off.

Taking to Instagram, Ayanda Thabethe gushed over the amazing feeling of being recognised for her 8 year presenting career which started way back in her Top TV days. She further added that it wasn’t an easy journey to become the sort after celebrity she is today but she is humbled by the recognition and will view this milestone as a motivator to further push herself into greater things.

“This is the first time ever that I’ve been nominated in a TV presenting category having started presenting in 2012 on TOP TV – 8 years later ?… “ It takes a long time to become an overnight success”… I’m just happy to be even recognized in this way for my craft. Fantastic news indeed and such good motivation to keep keeping on! Thank you for the nomination” she wrote.

Ayanda has been nominated in the Best TV Female Presenter category at this years Gagasi FM awards and is up against some of TVs other favourite faces which include Pearl Thusi, Minnie Dlamini Jones, Nandi Madida, Nomalanga Shozi Anele Zomdo and Carishma Basday. 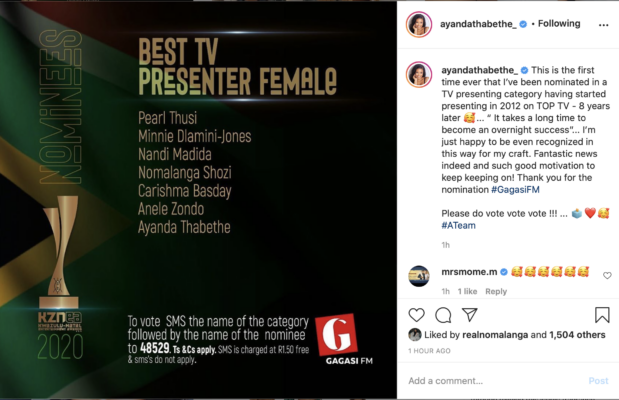