South African international star comedian and The Daily Show host Trevor Noah has been announced as the host for the 63rd edition of the annual Grammy Awards  which will be taking place on Sunday, Jan. 31 2021 at 8 p.m.

Trevor who has also previously been nominated at the Grammy’s has shared his excitement of hosting the prestigious awards night as he will be able to empathise and offer some great comfort, to all those who walk away empty handed just like he did when Dave Chappelle took the award last year.

“I think as a one-time GRAMMY nominee, I am the best person to provide a shoulder to all the amazing artists who do not win on the night because I too know the pain of not winning the award! (This is a metaphorical shoulder, I’m not trying to catch Corona). See you at the 63rd GRAMMYs!” he said.

According to recording Academy chair and interim president/CEO Harvey Mason, Jr, Trevor was the right candidate for the job because he is a natural born entertainer. Mason also mentioned that the platform is very happy to have Noah join the team and trust that he will do his best at making the night a success.

“With a knack for keeping viewers engaged and entertained, Trevor is the perfect choice to lead us through what’s sure to be an incredible evening full of music, unforgettable moments, unity and inspiration. He is a dynamic host, comedian and personality, and we’re thrilled to welcome him to the Grammy stage as host of music’s biggest night for the first time” the CEO said.

The nominees will be announced tonight and as expected, Mzansi is beaming with pride as one of our own is making waves in the America. 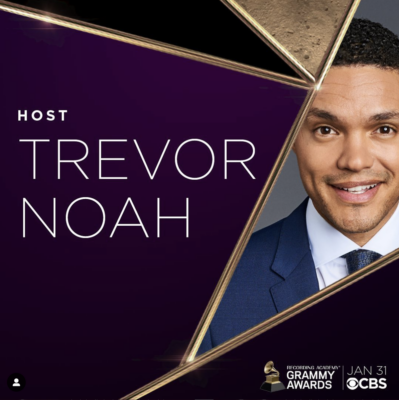