Ntsiki Mazwai is back at it again on social media although this time she’s in support not attacking. Mazwai thinks the white DJ calling herself Kasi Mlungu should express herself however she wants. Ntsiki Mazwai comes to Kasu Mlingu’s defense.

Ntsiki says black twitter is full of hypocrites who imitate other cultures but don’t want anyone to embrace any South African culture. “Kasi mlungu STILL trending? When r u gonna embrace your own heritage so you can stop hating on people who do?,” she tweeted. 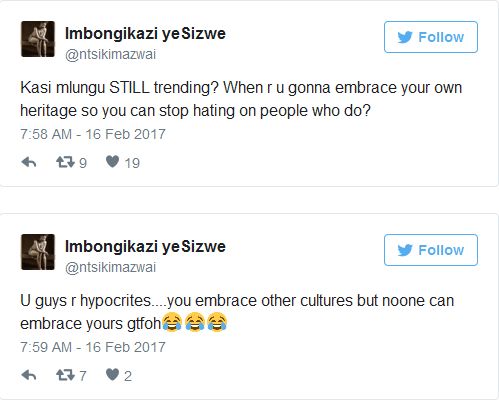 Ntsiki says South Africa is not normal because “our whites are too special”.

Kasi Mlungu does not surprise me. if SA was normal…MOST whites would have an African swag. Its just that our whites r too ‘special’

Here’s How Much Pasi Koetle Wants To Bless Her Sister With For Her Birthday!