Ntando Duma Scores A New Role On Mzansi Magic’s Hit Telenovela. The Queen is all about keeping the show captivating by adding more of Mzansi’s favorite faces on the cast and Ntando Duma is set to also be joining the already star studded production of the Mzansi Magic hit soapie.

It was announced that Duma is soon to make her debut on The Queen, playing the role of Mpho who is the daughter of Rapulana Seiphemo’s character.

According to SowetanLive Ntando Duma gave up her role as Noluthando on the upcoming BET drama Isono: The Sin for a bigger role on the Ferguson’s Mzansi Magic telenovela.

“It was a difficult decision for me to make because I loved that character in Isono, I had already invested in the character but The Queen made more business sense for me than the other show,” Duma said.

This is a dream come true for Duma as she had previously auditioned to be on The Queen to play the character of policewoman Georgina however, the role was given to Sibusisiwe Jili.

“I’ve always wanted to be on The Queen and it was part of my 2020 vision board. It’s a dream come true for me. I’ve always respected the Fergusons and their work. I’ve always seen my level of craft being on that level of the Fergusons. God did the things and here I am,” she added.

It’s not yet revealed when exactly she will be making her debut on the show but we are very excited to see what she is going to bring to the drama. 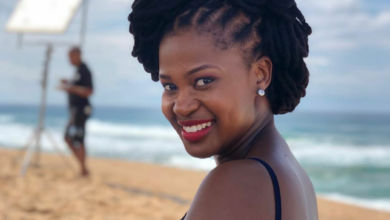