Khanyi Mbau Breaks Her Silence About Boyfriend Kudzai Following Their Recent Trip To Dubai. Reality star and businesswoman Khanyi Mbau has since been trending on social media after she left her boyfriend Kudzai Mushonga in Dubai, claiming that she was going to the salon. The Zimbabwean businessman has been crying on social media about how much he loves Khanyi and also apologized fro not knowing what he had until it was gone.

Things between the two were up in the air as both of them didn’t confirm that they are still together or have broken up. Once again teaching social media users to drink water and their business, Mbau took to her Instagram story to break her silence about her and Mushonga‘s relationship status at the current moment. Supporters of the couple will be happy to know that all is well between the 2 K’s and everything that went down is now in the past.

Khanyi shared a picture of herself with Kudzai having a passionate kiss while in Dubai with the caption “I don’t hate you. I never will“. The mother of one also shared that the situation was also a learning curve for her and she is choosing to look past it like everyone else should as well. Mushonga reposted the story on his Instagram and captioned the post with two heart emoji’s.

Mbau was also trending on twitter after a club appearance that she recently did where she made a mockery out of ditching Kudazi in Dubai. The actress began chanting and dancing about going out as if she would return soon and leaving him waiting in Dubai. Social media users have since been split about the clip claiming that for a mother with a daughter, her actions are embarrassing while other have dubbed her the female G.O.A.T when it comes to mjolo.

According to reports, Khanyi had enough of Kudazai on their trip as he was too busy on his phone, not giving her his full attention. A heated fight broke up between the two where hurtful things were said, when Khanyi decided to secretly pack her bags and leave. Kudzai admitted to neglecting Khanyi in an emotional video where he warned men of what happens when you neglect your woman.

Either way, we are glad that the two are still in together. 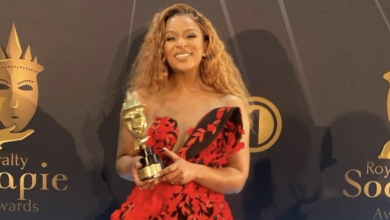