Actor Joe Kazadi recently had an adorable baby girl however, it was bitter sweet because this was around the time he got the boot from Mzansi Magic production ‘The Queen’.

In a candid interview on Phat Joe’s enticing sit-down dinner table conversation with other celebs on Cheeky Palate, Kazadi who played the role of Thabiso Ngcobo on ‘The Queen’ detailed the hardships that came with fatherhood after losing his job on the Mzansi Magic show.

According to him, he was faced with so much strain on his marriage and financially to the point where he had no electricity at home.

Being the creative that he is, Joe planned a photoshoot with his baby girl that clearly got to many peoples hearts because after he shared the image on social media, many people started donating essentials such as diapers, formula and more to help him survivor with his daughter. 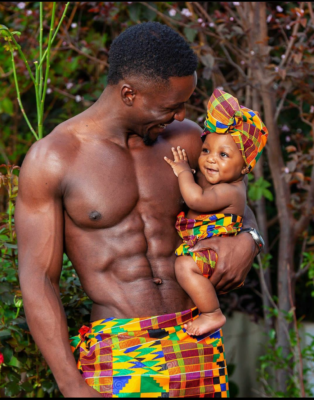 He continued to testify that God would never give one the gift of a baby and not give them a way to take care of the responsibilities that come with parenting and lucky for him, his fans and followers were his saving grace.

“One picture just opened doors for me, but God will never give you such a big responsibility and not provide” Kazadi said.

Joe has now bagged a new gig on the new BET telenovela Isono.