If you didn’t know that TV personality and actress Nomzamo Mbatha is a huge Orlando Pirates fan, now you know.

The beaut is often seen at Orlando Pirates games with her Bae Maps Maponyane, or with her aunt. Lose or win, Nomzamo is always there for her team. 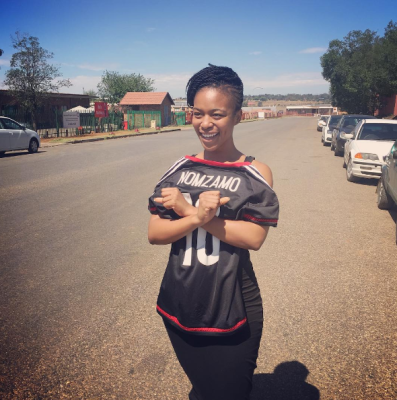 In a recent interview with Pirates TV, Nomzamo explains how she’s been a Buccaneer since was a little girl and how her late father didn’t like her team preference.

“I’ve always been a Buccaneer since I was very, very small. Since I can remember anything about the sport. My father was not happy about that because he supported the other team which I will not mention, and my mom is a Buccaneers fan. So he could never get the fact that his daughter was not supporting the same team as he was.”

Nomzamo was then put on the spot to find out how much she really knows about her football and her favourite team Orlando Pirates.

She took part in a quiz against Pirate’s stars Thamsanqa Gabuza and Thabo Rakhale and well boys, let’s just say some girls really do know their football.

Check out how she did below: