Actor Mpho Sibeko has been slowly booking more acting gigs, having starred in popular local television drama’s such as Isithembiso, Scandal and Gold Diggers. Now the actor has revealed the exciting news of joining a brand new telenovela.

Taking to Instagram, Mpho reposted a tweet from famous soapie reporter Phil Mphela, announcing that he will be joinging the cast of an upcoming telenovela called Estates that will be airing on SABC3. The telenovela is produced by well known production house Clive Morris Productions, and is said to be replacing Isidingo.

Mpho celebrated the news in saying that his ancestors are to thank for always helping him secure the bag and we can already bet that fans are very happy to know that they will be seeing more of the actor on their silver screens.

“My ancestors are working overtime” he wrote.

Details surrounding when the show will be premiering are still unknown but we are super excited for Mzansi to introduce what just might be the next big drama show. 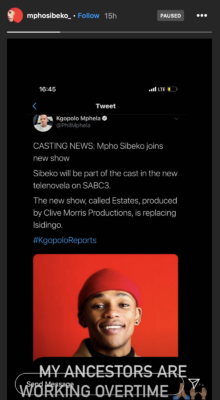