Bonang Claps Back At Her New Hairstyle Haters! Whilst the media personality often prefers to kill them with kindness, once in a while she likes to dish it out like everyone else. We live for queen B’s clap backs in Setswana.

After switching up her hairstyle to a dramatic curly long hair, Bonang was on the receiving end of subs on twitter which she caught and fired back at.

After one twitter user suggested girlfriends should face consequences for bad hairstyles, Bonang had the perfect clap back and we’re here for it.

Queen B says if you don’t have money or didn’t pay for it then can’t speak on it. 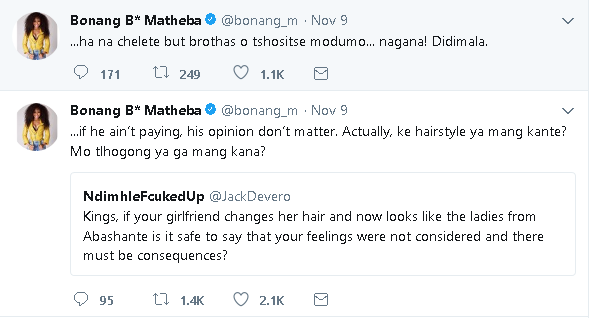 Here’s How Much Pasi Koetle Wants To Bless Her Sister With For Her Birthday!